You are here: Home

Insanity, insanity! Welcome back to DEMENTED ARE GO, “Welcome Back To Insanity Hall”! What is there to say about DEMENTED ARE GO that hasn’t already been said or invented? They are a band that has inflicted their twisted version of rock ‘n’ roll on the world for 3 decades, from the legendary Klub Foot via clubs, squats and festivals all over the world. They have built up a loyal following of Psychobillies, Punks, Goths, Geeks and Freaks who just can’t get enough of DAG’s sound. Always a live act not to be missed, their catalogue of releases over the years is proof that the band is always evolving and never restricted to one scene. The reason for the bands longevity and popularity is down to one man, Sparky. A one man riot who sold his soul for Rock‘n’Roll!
Uncompromising, unpredictable with a voice that sounds like he’s been gargling hot gravel he is instantly recognizable as one of rock ‘n’ rolls true leaders. How he has kept the band going for 30 years is beyond explanation. 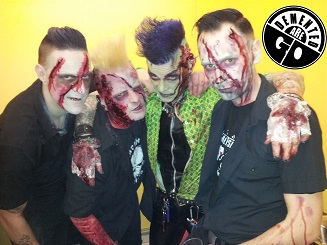